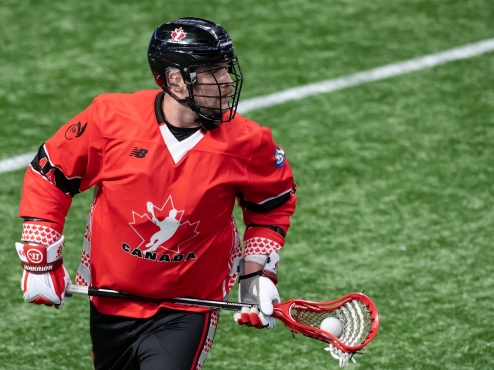 Langley, BC— This was the matchup that everyone was waiting for: Team Canada vs Team Iroquois. It was an exciting game, with Canada down one at the half. Canada made a strong comeback in the second half and won 19-12. This was the last game in the round robin and Canada will be moving on to the semi-finals as first place in the blue pool.

Dhane Smith, who was celebrating his birthday, scored the first goal of the game. It was an evenly matched first quarter with a score of 5-4. In the second quarter, Shayne Jackson, assisted by Robert Church, scored for Canada. Iroquois responded with three goals, sinking their third goal in the last seconds of the quarter and pulling ahead 7-6.

“We needed a little adversity. Sometimes you get punched in the mouth and there’s nothing wrong with that. You need to figure out how to respond,” said Glenn Clark, head coach of Team Canada. “We went through some details of things we needed to adjust to. We wanted that challenge and to see how we’d respond to it—and we did a good job of responding to it. It was a good reminder of what’s at stake and what it’s going to take to be successful.”

In the third quarter, Canada pulled ahead scoring six goals and Iroquois scoring one. The fourth quarter did not let fans down, with an exciting exchange between Canada and Team Iroquois. With just over nine minutes left in the game, Iroquois nearly closed the gap with 13-12 for Canada. Canada buckled down and scored the next six goals, finishing the game with a 19-12 win.

“It was a rough start,” said Dhane Smith. “We knew they were going to come out. It was a change of pace, having played lighter teams. They played well in the first half and we had to adjust, and we did that in the second half.”

The atmosphere in the arena as well as on the floor was full of energy and excitement.

“It was a lot more intense and a lot faster,” said Clark. “Those guys were playing hard minutes and they were playing physical. At first it took us a while to respond, because we hadn’t had that physicality in a game. Sometimes you need to be in that moment and then your mind and your body catches up to it. I think they did a good job second half responding to it. They were consistent throughout.”

Canada has the next two days off from games before semi-finals. Smith said he is looking forward to the team bonding over the next few days, including a team trip to Grouse Mountain on Tuesday.

“This is my second time around at Worlds,” said Smith. “It’s nice meeting new guys and we have a very stacked team.”

The complete match schedule, including playoff brackets, can be found here.