In Conversation With... Sheena Hubelit 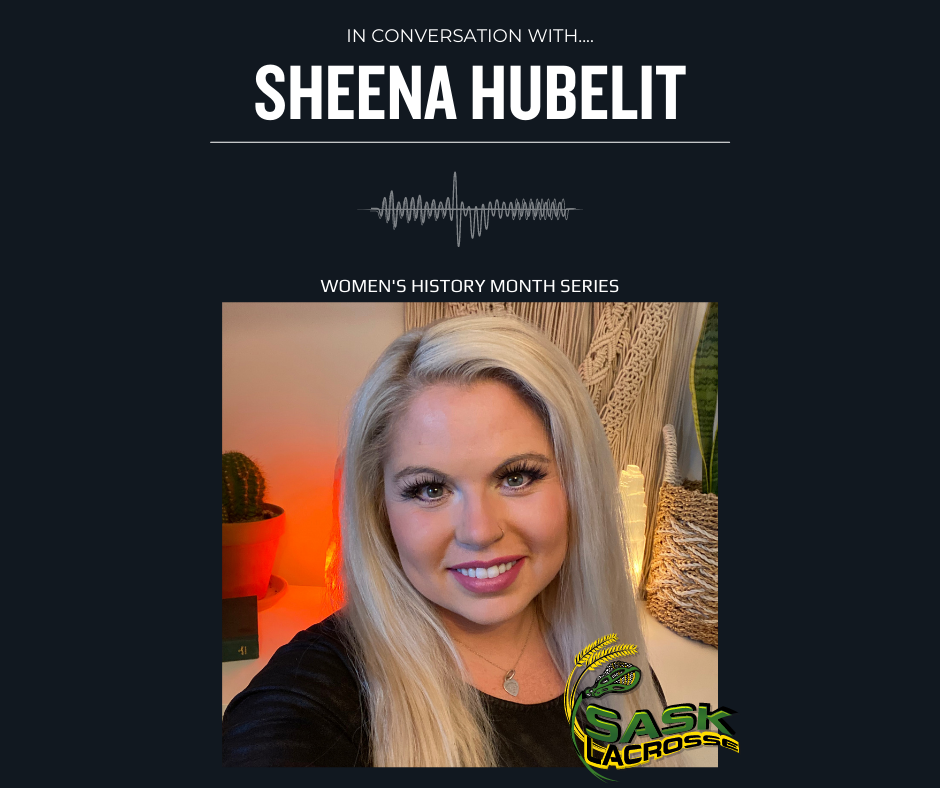 As part of our ongoing Women’s History Month initiatives, Saskatchewan Lacrosse Association President Sheena Hubelit sat down for an interview on why she is so passionate about the sport, and her hopes for the future of lacrosse in the Prairies.

Hubelit is currently the only female President of an MA in Canada, and the first female lacrosse President in Saskatchewan.

1. Tell us a bit about yourself and your background!

"During the day, I work full time at a post-secondary institution where I specialize in foreign credential assessment and international admissions. I’m a mom, wife, and past business owner/entrepreneur. I can speak a little Mandarin, Spanish, and am working on learning some Cree as well. Evening and weekends - I live, eat, sleep and breathe lacrosse in my volunteer positions!"

2. When did you get involved in lacrosse?

"My journey into the lacrosse world started approximately seven years ago. I've served seven years/terms locally with the Saskatoon Field Lacrosse Association, and I'm in my sixth year of service provincially with the Saskatchewan Lacrosse Association. Four of those years were as the Men's Field Sector Chair, and the past two years I've been serving as the President."

3. Why are you passionate about the sport?

"Initially, I was passionate about Lacrosse because my son and daughter play, and I was shoulder tapped to join the local board. Once I started learning about Lacrosse, the history and true roots of The Medicine Game, it piqued my interest and I became even more passionate about the sport.  In the spirit of truth and reconciliation, I would like to take a moment to pay respect, acknowledge and reaffirm our relationships and my commitment as a leader to do my part to sustain long-term positive changes as we create a pathway forward. I’m honored to live and work on Treaty 6 territory. My work with Lacrosse in Saskatchewan reaches lands covered by Treaties 2,4,5,6,8 & 10. I am also extremely grateful for the traditional Knowledge Keepers and Elders in local and national communities."

4. What has been your proudest moment?

"When I was nominated and ultimately became Men’s Field Sector Chair and then President of Sask Lacrosse, those were my proudest and most humbling moments because my peers chose me to be their leader. This is an honor that has been bestowed upon me because I worked hard to be the best volunteer I could be and people started to see the leader and what I could accomplish before I saw it in myself."

5. What does your role look like as President of an MA?

"My role thus far as president has been learning with humility from local and national leaders, realizing how much I don’t know, and identifying ways to fill the gaps. Although some might think it’s strange that I would admit that, I can't pretend like I know more than I do. Other than that, it’s a ton of e-mails, phone calls, zoom calls, text messages, politics, meetings…ya know...all the fun stuff."

6. What advice do you have for other young women who may want to follow a similar path?

"Strong leadership transcends time and gender. No matter who you are remember to work hard, be humble, take ownership, be courageous, be consistent, have core values like character and integrity, do what’s right, not what’s easy, and don’t let haters get you down. People want leaders that are willing to put the work in day in and day out, leaders that don’t have personal agendas, leaders that lead fairly, leaders that get results and don’t make excuses.

As a recovering introvert and being a somewhat socially awkward person at times (yes, I hide it well) it’s taken me a long time to realize that people will judge you no matter what you do, you need to focus on yourself and remember that your only competition should be you!

Be authentically you. Some will love you, some will hate you—but just be you! And whatever you do, don’t be jealous…be proud of others, let other people’s accomplishments motivate you to be a better you!

Also, don’t forget to lift other people up along the way, maybe it’s a congratulations, maybe it’s a compliment, maybe it’s sharing a post…. there are a million ways to be kind and show support.. just remember…we rise by lifting others!"

"Where does one begin!? So many people from the past and present have inspired me for various reasons. Yes, I have well-known names on my list BUT they are not on my list because of who they are, I don’t really care what their names are or how famous they are. I care about what they’ve done/achieved and how each of these people has shaped me as a leader in some way. Present: Amanda Brugel, RuPaul, Jeremy Thompson, Ryan Reynolds, Dwayne Johnson (The Rock), Paul Rabil. Historical figures: Nellie McClung, Diana, Princess of Wales, Rosa Parks, Maya Angelou, Marilyn Monroe. Kickin’ waaay back: because they were fierce and absolutely deserve a spot on my list: Joan of Arc, Mary, Queen of Scots."

8. What is your favourite lacrosse memory?

"Hands down my favorite memory is one that also challenged me and shook me to the core.

It was the day I was nominated as Men’s field sector chair (prior to my Presidency), I was new, first time some members had met me and my name was put forward as a nomination. The room went silent and all eyes in the room slowly moved to me. The shock in the room was almost tangible and you could see the wheels spinning…Fast forward to the end of the meeting - I was nominated and took the field sector chair, as any respectful leader would do, I went around to introduce myself, shake hands and meet eyes with people.

One gentleman refused to shake my hand, stared me blank in the face, said “Don’t drop the ball” and walked away.

All I could do at that moment was take a deep breath and try not to look too shocked…I understood why he felt the way he did, he had a right to, like who’s this chick, where did she come from and how is she going to lead us. It was at that pivotal moment that I made the decision that I would NOT drop the ball… I knew I had to prove my ability to lead, prove my ability to do the things I said I would do…once they started to see results, I would get the odd hello, or head nod, then it moved to full conversations, and then it moved to them coming over at events, seeking me out and shaking my hand.

While serving as field sector chair during my 4th term I was then nominated as President of Sask Lacrosse. There is no greater joy than that feeling of knowing my peers nominated me, supported me, and stood behind me to be chosen as THEIR LEADER.

The work has only just begun, with each new place of leadership comes new roles and responsibilities."

9. What do you want people to know about lacrosse in Saskatchewan?

"Sask Lacrosse has come a long way in the past few years. We are redefining leadership roles, creating new opportunities, analyzing our planning methodology to better strategize which is allowing us to see growth across the Province. We are also extremely thankful for the partnership that we have with the Saskatchewan Rush, through their generosity and continued support we are able to create and offer new exciting opportunities to the Lacrosse players in Saskatchewan."

10. What is your hope for the future of girls in lacrosse?

"We are seeing solid results across the nation with the efforts put in by provinces and volunteers. With continued growth in the female sector, I hope to see more inter-provincial games and championships with participation from each province. This will take time to build, Rome wasn’t built in a day and this won’t be either, but I think we are on the right path to success!"